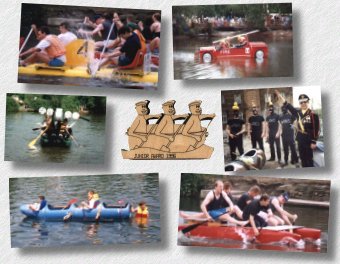 The Marple Raft Race held at Etherow Park has become an annual event of long standing, usually taking place on the Sunday of each Carnival Weekend. The first Raft Race was organised by the Marple Firemen in 1986 and each year since it has grown in popularity and size. During 10 years of fun and fund raising there were many memorable moments and in excess of Ł7,000 was raised for a variety of charities.

The Firemen were regular winners of the race in the early years but later were strongly pressed by an ever more determined team from the Marple and District Round Table. The rivalry between these two became a feature of the event and added a strong competitive edge on occasions. After the 10th Anniversary race the organisational baton was handed over to the  Round Table. This was probably another ploy by the Firemen to stop them winning.

Victory was was not always limited to the race itself, as in 1993 the Firemen won a battle with the Stockport Angling Federation to be allowed to hold the event on carnival weekend, despite a clash with the first day of the fishing season.

The 2003 raft race was held on Sunday 15 June, when Chris Bowler and his Round Table team once again lived up to the high standards set in previous events. Read more about these using the links below: